Infantry Regiment of the Civil War, also known as the Fox Valley Regiment was organized in Aurora in September of 1861. According to the Adjutant General’s Report, the Regiment included 965 officers and enlisted men, forty-seven being from DuPage County. Officers from Cook, Grundy, Kane, Kendall, Lawrence, McHenry and Warren Counties completed the regiment.

Made of painted silk, this flag was brought back to Springfield after the war. Recently professionally conserved with intensive cleaning and precise repair of the fabric, the restoration of the flag has ensured that it will be an educational tool for generations to come. The restoration was made possible by generous efforts of the Illinois State Military Museum, The Illinois National Guard, the DuPage County Historical Museum, Illinois Sons of Union Veterans of the Civil War Camps 1 and 2, The Civil War Roundtable of Chicago, The Salt Creek Civil War Roundtable, the McCormick Foundation and many individuals. The National Colors will remain at the DuPage County Historical Museum through July 2018, on loan from the Illinois State Military Museum. The guidon flag was carried by the soldiers of the 8th Regiment of the Illinois Volunteer Cavalry during the Civil War. Beginning in early 1862, the 8th Illinois was stationed in Washington D.C. and attached to the Army of the Potomac, fighting in their first battle at Williamsburg. The unit also fought in a number of engagements including Mechanicsville (Seven Days Battle), Hanover Court House, Seven Pines, Brandy Station, Middleburg, Upperville, and Gettysburg.

The 8th Illinois aided in the hunt for John Wilkes Booth, President Abraham Lincoln’s assassin, and served as Lincoln’s honor guard while he lay under the U.S. Capitol Rotunda in Washington, D.C.

Restoration of the flag began last August at the Peebles Island Resource Center in New York. A total of $20,000 was raised to fund the work through the combined efforts of the DuPage County Historical Museum, the Illinois State Military Museum, the Illinois National Guard and Militia Historical Society and the 8th Illinois Cavalry Reenactors.

The Guidon will remain at the DuPage County Historical Museum through February, 2018, on loan from the Illinois State Military Museum.

Watch a video of the 8th Illinois Cavalry Guidon Dedication held on July 1, 2012. 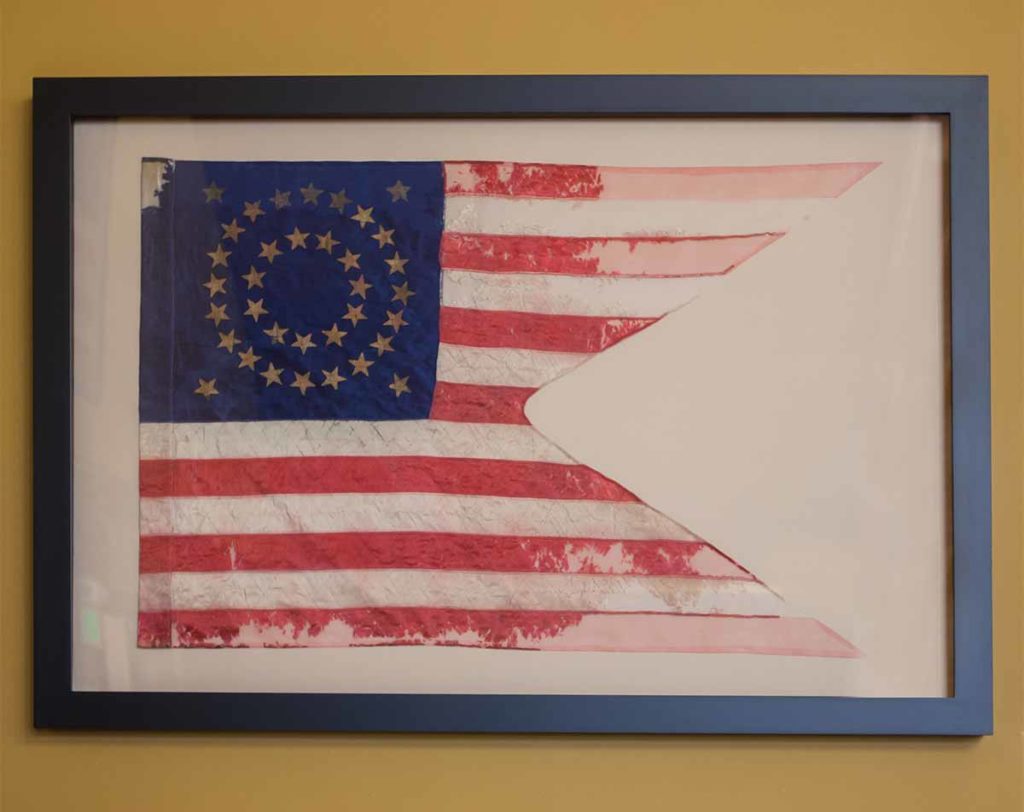